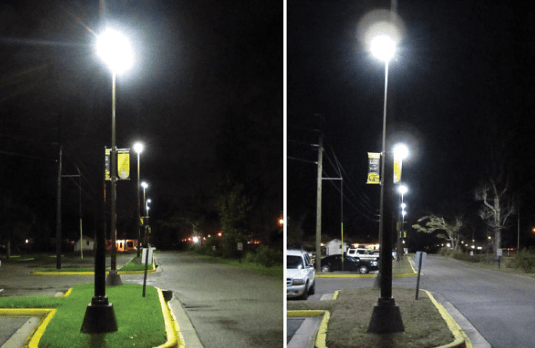 When we talk about LED parking lot lights, this mainly refers to lights that are mounted on poles in parking lots. These light fixtures are relatively new to the industry, but they have completely changed the game. Light emitting diodes, also known as LED lights, are so far ahead of traditional lights that more and more companies are switching to them for their lighting needs.

Before we get into the benefits, let’s explore what LED lights are and why they have such an advantage over other lamps when it comes to lighting up parking lots. LED lights generate light and distributes it in a much more efficient and effective manner. LED’s produce light with the use of a semi-conductor. Traditional lights use a fuel source to create light. A conductor is a much safer and much effective method as it generates more light and less heat. But there’s more to it than just that. Here are four of the biggest benefits of LED parking lot lights.

One of the biggest and most notable benefits of LED parking lot lights is that there is big energy savings. The common wattage for LED lights can be anywhere from 40 to 600 watts, depending on the size of the lamp and the fixtures. But for the fixture and size, an HID parking lot light would have 400 to over a thousand watts. Most parking lots have consistently seen 50 % to up to 80% reduction in energy consumption. This means that your parking lot can save as much as $300 to $500 per fixture per year, just on the costs of electricity. That is one of the reasons why most parking lots have switched over, even if the cost of switching is quite substantial.

There is also significant savings made with LED lights when it comes to maintenance costs. Because of the way LED lights are made, there is a huge difference on its lifespan and longevity. The main reason for this is because of heat. Heat from traditional lamps wears down the parts which will cause it to eventually fail over time. LED lights generate less heat and there is less of a chance of failure. LED lights are also engineered differently. When HID lamps fail, they turn off completely and they have to be replaced immediately. LED lights simply degrade over time, and the light dims rather than stopping altogether. 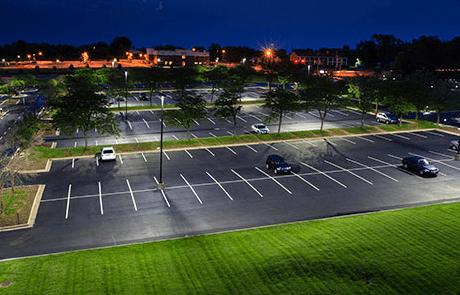 Lighting performance is the most important feature of a parking lot. This is so that you can make sure that pedestrians, drivers, and even your attendants feel safe. Having enough light makes sure that there is satisfactory visibility when they walk and drive around. It also creates peace of mind having proper lighting in your area. LED’s distribute light in a multi-point way, which makes their light evenly distributed on surfaces. This also means that the light will be able to reach surfaces on greater distance than traditional lamps. When you compare this to HID lamps, they will have a limited bright spot under the fixture and the light levels drops off the farther you are to the source.

Aside from affecting the carbon footprint by spending less energy, there are also several environmental advantages to using LED lights. As mentioned before, LED’s use semi-conductors instead of a fuel source, this means it gives off far less carbon dioxide and other emissions. The heat levels of each LED lamp are also significantly less. This may not seem like much, but for parking structures that have lamps on hours at a time everyday of the week, this makes a drastic difference. Light pollution, or spilling over light that is not needed or wanted, is also significantly less with LED light sources.

There are definite benefits with having LED light for your parking structure. While converting to LED lights can be costly, there is a much more savings to be had in the long run with the reductions in energy costs. A return of investment can be realized in as little as 1-2 years. Savings in maintenance will also help in covering the installation and/or conversion fees. Better lighting performance and a significant impact on the environment are also benefits that can only help your parking lot business.